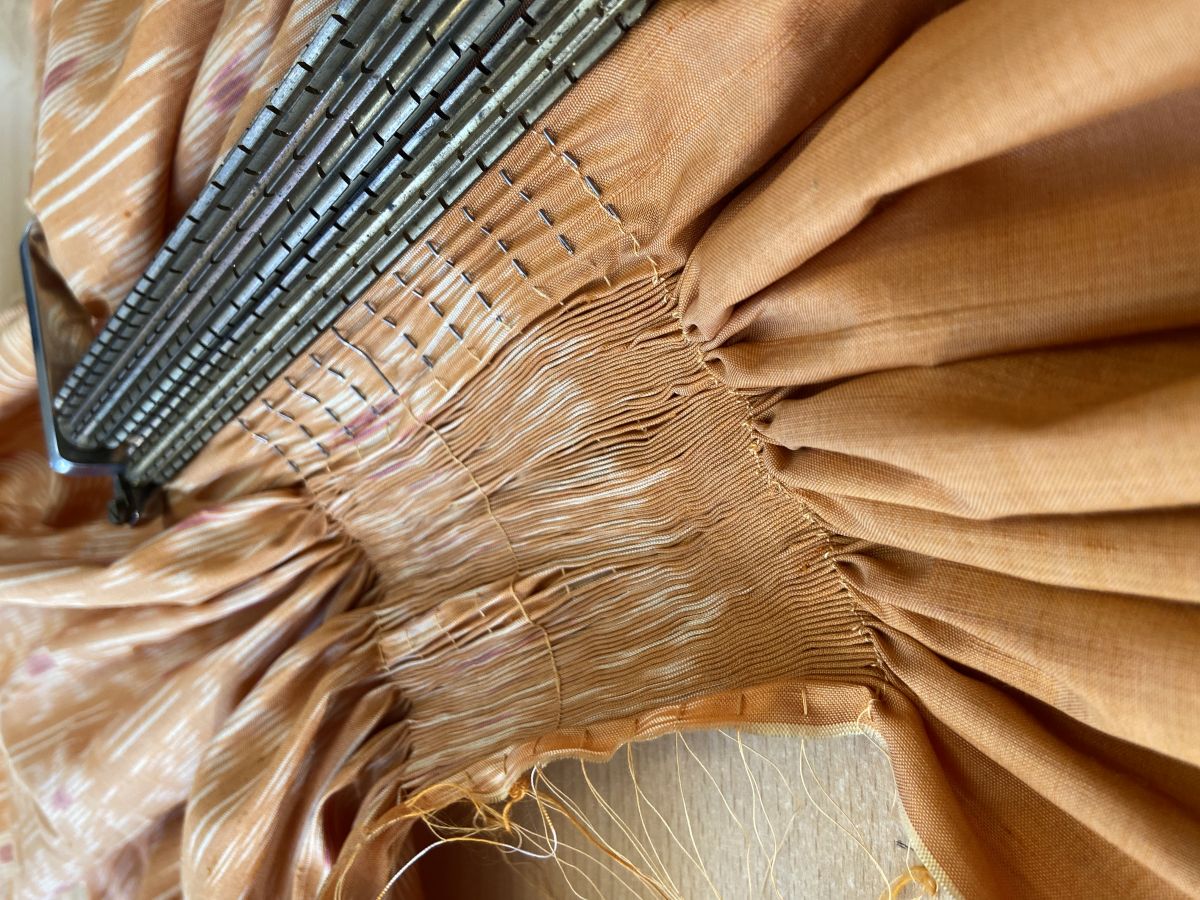 For Saskia ter Welle’s couture collection “Cherish the Moment,” presented at Thai Silk International Fashion Week, we thought it would be a lot of fun to use smocking.

Saskia had purchased an old, so-called “pleater” earlier in the year during a visit to South Africa. This machine more than 50 years old was still performing excellently.

However, upon commissioning it, found that the needles had become blunt.  Of course we went  looking for replacements, but this turned out to be an adventure in itself. Where exactly can you find the right size of these -very oddly shaped- needles? We eventually managed to get the right needles through House of Smocking, based in England. Now our smock experiments could really begin!

Things did not go smoothly …

We found out pretty quickly that we certainly didn’t know everything about smocking, but that didn’t stop us while experimenting. We put different materials through the machine, with many of the results being very surprising.

With one of the outfits, the purple dress, we ran into some difficulties.

First, the fabric for the pattern we wanted to smock was not straight but round -it ran in a curve. Not only was this very difficult to roll up (more fabric on the outside of the bend); the amount of fabric we wanted to smock turned out not to fit through the device! We had to come up with solutions.

We decided to loosen some seams so we could put the dress through the machine in smaller pieces. That immediately went much better! Smocking the back the dress was a little trickier, due to the thickness of the center back seam. With some force and by collectively carefully feeding the fabric through the machine, it finally worked.

Meanwhile, a very nice coincidence came our way. Rosemarijn had sent an e-mail to Saskia asking if she could help her further on the creative front.

Rosemary has a lot of experience making smock dresses (over 100 pieces …!), but lacked the sense of freedom to go off the beaten path. This was an ideal match! We the practical tips, Rosemary new ideas to apply smock work.

Meanwhile, Rosemary has transferred much of her knowledge about smocking to us. She gave us helpful tips on such topics as how to embroider smock work, and how to properly secure smock work so that the threads do not escape from your work prematurely. 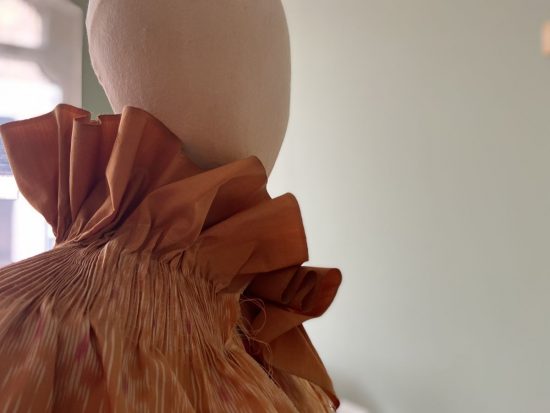 Because Rosemarijn threw herself wholeheartedly into back-smocking the fabric of the orange cape, we were able to make great strides again in the other outfits of the collection. That’s always nice when time constraints come into play.

Well there are some things you should pay close attention to while smocking.

First, it is by far the easiest to put the fabric through the pleater in pairs. This is because it is very important that the fabric goes straight through the machine, otherwise the pleats will not run straight along each other, but will pull away at an angle.

Secondly, it is good 0m to keep in mind that you need to leave extra space on the sides for the seams. You can do this by removing some stitches from the basting threads of the smocking on the sides (seam allowances) after smocking.

The third tip is this: treat your basting threads before using them in the pleater. We did this with Thread Heaven, a kind of conditioner (not wax!) for your yarn. This made the fabric slip considerably easier through the needle-wire of the pleater. Thread Heaven has since been replaced by Thread Magic. Its use is clearly explained in this video:

Always make a smock sample from the fabric you are going to use. Every fabric behaves differently, and we ran into that while smocking. Some fabric went through the machine more smoothly than others!

A fun and useful experiment we conducted was steaming the smocking. If you let this dry well, you can remove the basting threads from the fabric and the pleats will stay in place very nicely. If you had not backsmocked this beforehand, an incredibly cool effect is now created. The fabric now becomes elastic! Truly fantastic to see and to work with.

I can already see endless possibilities for applying smock work. The first thing that usually comes to mind are smock dresses, but the possibilities are truly endless! For example, think of a cool clutch made with a smocked fabric, or a belt, for example. We were playing around with our samples and quickly saw that a smocked cuff of a sleeve also looks super pretty. In addition to all these suggestions, you can of course experiment with the elaboration of the smocking itself! For example, larger spaces between the machine’s threaded needles creates a kind of “bubble” effect in the fabric. In addition, you can also change the whole look by embroidering the smocking. Despite the fact that we’ve already tried a lot, I see many more fun options to explore! 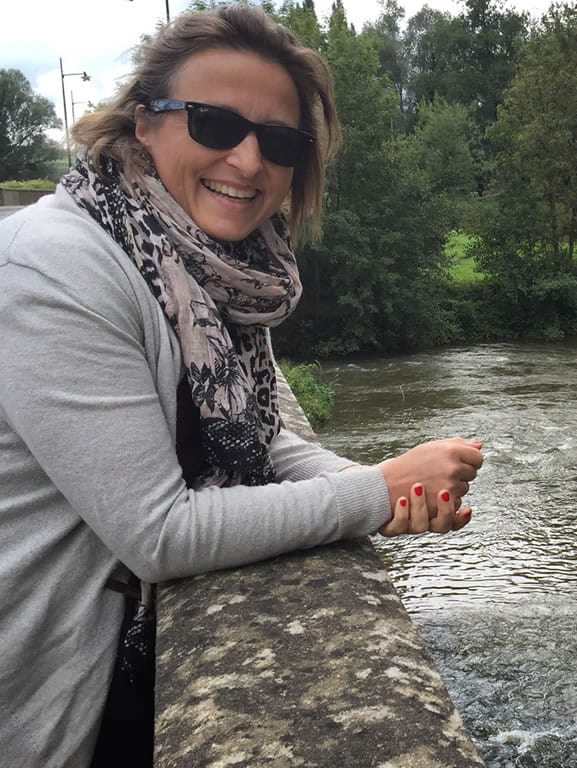